Introduction of a Company

Talesun Energy (Zhongli Talesun Energy) is one of the leading manufacturers of solar panel and solar panels, not only in China, but also around the world. The Zhongli Science and Technology Group, as the producer with the largest share of China’s cable production, founded the Talesun Solar company in 2010 with a capital totaling $ 850 million. At present, the production capacity of this complex is 4 GW Solar Cells annually and 5 GW Solar Modules.

The factory is located in a 21 hectare area in Jiangsu, China. Fully automated equipment used in this factory has been purchased from leading suppliers such as Reis and Centrotherm Germany, NPC Japan and Baccini Italy. Talesun Solar is one of the few Chinese manufacturers who have won the VDE Quality Assurance Certificate, which guarantees the high quality of its products. In December 2015, Talesun Solar launched a new fully automated, 800-megawatt capacity plant in Thailand that increased the brand’s competitive power internationally.

The main activities of the Talesan Energy Group are:

The Gam Green Solar Energy (Gam GSE) as an exclusive agent of Talesun Company, which supplies its products in Iran. 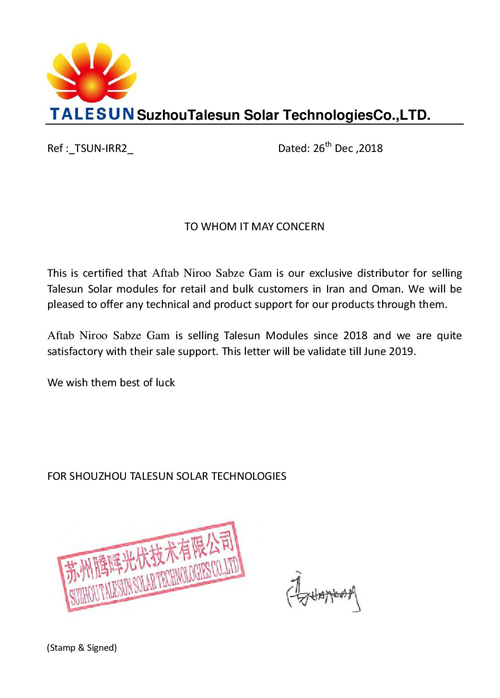 You can contact our consultants and our specialists at any moment through the high-level communication channels.